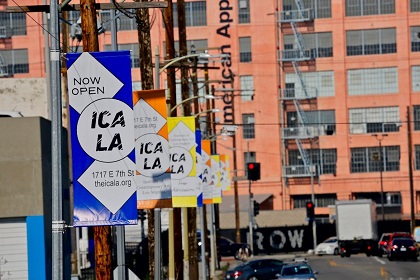 The Institute of Contemporary Art, Los Angeles (ICA LA) is a new museum located in Downtown Los Angeles. The ICA LA’s exhibitions of works by international artists, dynamic public programs, and inclusive community partnerships reflect the diversity of Los Angeles and the world. ICA LA’s mission is to support art that sparks the pleasure of discovery and challenges the way we see and experience the world, ourselves, and each other. Founded in 1984 as the Santa Monica Museum of Art (SMMoA), ICA LA builds upon a distinguished history of fostering artistic experimentation with bold curatorial choices and connecting with various communities via timely, meaningful, and engaging public programs. ICA LA is committed to making contemporary art relevant and accessible for all, by providing free admission. Among a variety of displays you will also see the popular Rafa Esparza: de la Calle exhibit. GOLD METROPOLITAN MEDIA is excited to work with the ICA LA to create banners for the museum near its entrance. 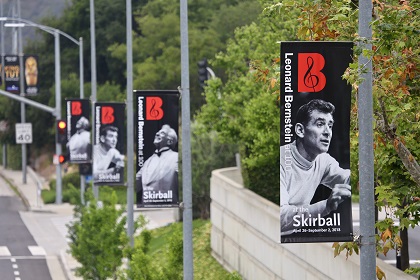 The Skirball Cultural Center presents “Leonard Bernstein at 100”. The exhibition is the celebration of the life and work of Leonard Bernstein, the great American composer and conductor who dedicated his life to making classical music a vibrant part of American culture. Organized by the GRAMMY Museum and curated by Robert Santelli, “Leonard Bernstein at 100” is the official exhibition of the Bernstein centennial celebrations. To explore the many facets of Bernstein’s life, this exhibition includes photographs, personal items, scores, costumes, and audio and video recordings. Featured objects on display will include Bernstein’s conductor baton and handwritten score sheets for songs from “West Side Story”. In addition, the exhibition includes several interactive displays designed to offer hands-on insights into Bernstein’s creative process and legacy. GOLD METROPOLTIAN MEDIA is proud to work with the Skirball Cultural Center to create City Light Pole Banners for the “Leonard Bernstein at 100” exhibit. 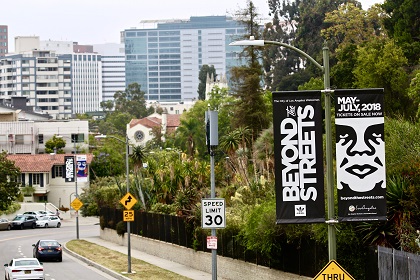 “Beyond the Streets” is the premier exhibition of graffiti and street art, celebrating the soaring heights to which the world’s most recognizable modern art movement has risen. The exhibition is a groundbreaking multimedia showcase of paintings, sculpture, photography, and installations throughout 40,000+ sq. ft. of industrial indoor and outdoor space. “Beyond the Streets” is on display in Downtown Los Angeles until July 6, 2018. GOLD METROPOLITAN MEDIA is excited to produce and install City Light Pole Banners throughout Los Angeles to promote the “Beyond the Streets” event. Don’t miss your chance to see this exciting new exhibit in town for a limited time! 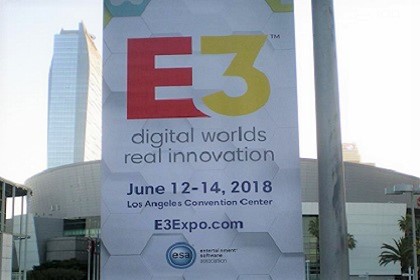 E3 is the world’s premier event for computer, video, and mobile games happening June 12-14, 2018 at the Los Angeles Convention Center. For three days, the industry’s leading professionals from the interactive entertainment industry will connect and showcase never-before-seen products. GOLD METROPOLITAN MEDIA is honored to promote E3 with hundreds of City Light Pole Banners throughout Los Angeles. 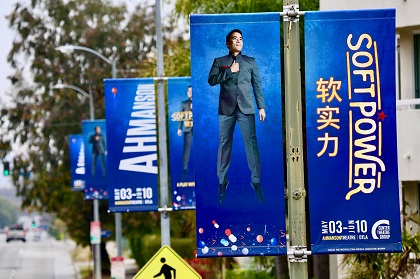 The world premiere of “Soft Power” is taking place at the Ahmanson Theatre in Los Angeles through June 10, 2018. The contemporary comedy explodes into a musical fantasia in the first collaboration between Tony Award® winners David Henry Hwang and Jeanine Tesori. The production follows a Chinese executive visiting America who finds himself falling in love with a good-hearted U.S. leader as the power balance between their two countries shifts following the 2016 election. “Soft Power” overflows with the romance, laughter, and cultural confusions of the golden age of Broadway. GOLD METROPOLITAN MEDIA is excited to work with Center Theatre Group to advertise the production with City Light Pole Banners. 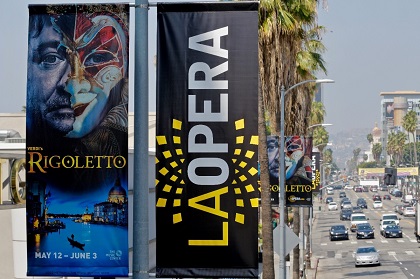 The LA Opera presents “Rigoletto”, the unforgettable tale of a father’s rage, a daughter’s shame, and a self-centered ruler who thinks he can get away with anything. Several of opera composer Giuseppe Verdi’s best-known tunes accentuate this timeless tragedy of sacrifice, betrayal, and revenge in this performance. “Rigoletto” is more than just a cornerstone of opera repertoire, it’s also one of the most heartfelt of all stage works. GOLD METROPOLITAN MEDIA is excited to work with the LA Opera to create and install these beautiful City Light Pole Banners throughout Los Angeles. 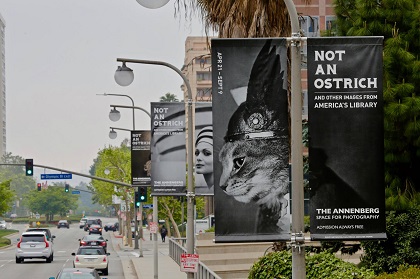 The Annenberg Space for Photography presents “Not an Ostrich: And Other Images from America’s Library”, a large selection of rare and handpicked works from vaults of the World’s largest library, many never widely available to the public. This exhibition spans across the history of photography—from daguerreotypes, the first photographic process, to contemporary digital prints. Iconic portraits of Abraham Lincoln, John Lennon and Elizabeth Taylor appear alongside unusual images, such as, Stanley Kubrick’s “Strong Man’s Family” (1947), John Vachon’s “Ice Fishing, Minnesota” (1956), and Nina Berman’s “Flammable Faucet #4, Monroeton, PA” (2011). Vivid color portrayals of America are highlighted in juxtapositions of popular travel views from the late 19th century on a screen next to striking contemporary scenes. A documentary film produced by the Annenberg Foundation featuring interviews with exhibit photographers, historians, authors, political figures, and civil rights leaders, is also on view. “Not an Ostrich: And Other Images from America’s Library” invites visitors to experience America’s shared heritage. GOLD METROPOLITAN MEDIA is honored to work with the Annenberg Space for Photography to produce and install City Light Pole Banners for the exhibit. 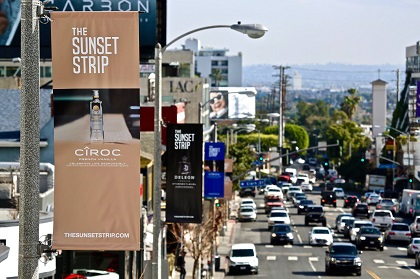 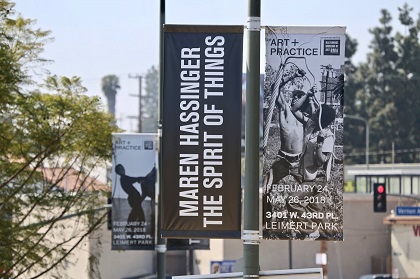 Art + Practice presents “Maren Hassinger’s The Spirit of Things”, an exhibition with sculpture, performance documentation, and videos that explore the emotional dynamics of relationships amongst different communities of people, and between them and the environments in which they live. For over four decades, Maren Hassinger has explored relationships between the industrial and natural worlds in a practice that is both meditative and critical. Since the 1970s, her sculpture has incorporated common materials associated with manufacturing, mass media, and commerce. GOLD METROPOLITAN MEDIA is excited to work with Art + Practice to promote the exhibit using City Light Pole Banners. 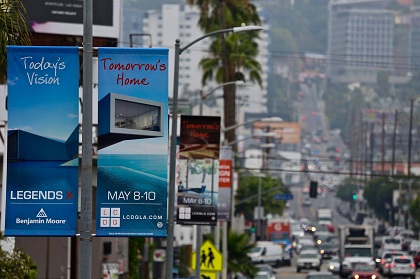 The La Cienega Design Quarter (LCDQ) presents “Legends 2018”, a 3-day celebration of design that brings together thousands of people from the interior design, decor, art, fashion, and architecture fields. The “Legends” event features more than 40+ receptions, keynote panels, forums, parties, personal appearances and numerous other opportunities for people to see and engage in dialog about design. This year the LCDQ celebrates the 10th anniversary of the Legends event with the theme “Today’s Vision, Tomorrow’s Home”. The theme will be expressed in the 50+ window displays of the member LCDQ shops, showrooms, and galleries in the La Cienega Design Quarter. Be sure to catch a glimpse of the La Cienega Design Quarter’s “Legends” City Light Pole Banners and the beautiful window displays this spring.